The lions are the most iconic cat species in the Animal World.

They are adored for the symbol of strength yet beauty with the endless courage, but at the same time, amazed by their social system of teamwork that makes them the only cat species that live in comunal system, known as pride. 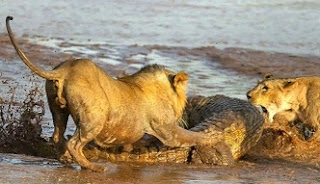 The ultimate research of lions conducted by Professor Craig Packer with his team in Tanzania with the project named as Serengeti Lion Project, discovers that the access of water in the living area would affect much in the breeding process of the species.

The lions that live where there are rivers that come together would get advantage from it.

They would be able to access more water in the year-round as well as have the best points for prey with the presence of good shade and ambush.

This is seen as a very valuable area for pride to exist and have strong defence.

After a very long time of project in Serengeti, the team finds out on how the advantages of the area are the factors of how these prides of lions have the highest reproductive success.

In the contrary, those prides without river confluence would tend to disappear much faster