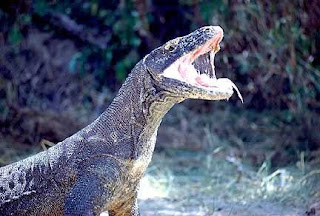 It is famous because of the population of protected animals. They are komodo. Komodo is known as the biggest lizard in the world. The tail of komodo is as long as its body.

Komodo eats everything from its prey and it is considered as an animal which is rarely to drink. Komodo are totally carnivorous and they like eating carrion.

This makes many young and baby komodo live on the tree to avoid such predators. Kodomo always try to eat as much as they can so they do not need to eat very often.

They normally eat once a month. Although most of komodo eat animals, some of komodo appear to be dangerous for humans. Starving komodo which cannot find its prey can easily hunt human for its food by its poisonous teeth and saliva.

It is supported by its incredible fast movement in short distances which allows human not to do even a movement.