Komodo island is the new 7 wonders of the world. It is the place where over 2000 inhabitants live along with komodo. 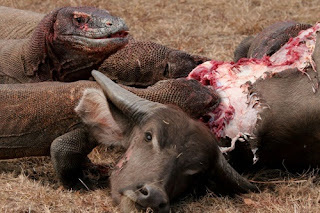 Komodo live in Komodo National Park which is located in Komodo island. Known as rare animals, International Union for Conservation of Nature and Natural Resources (IUCN) protected the animals under the law and anything harmful for the komodo population will cause punishment.

There are some different arguments come for komodo. Some people consider komodo as tame animals whereas some say that komodo belong to dangerous animals.

There was a boy who died because he was bitten by a komodo. Komodo is known as animals which have shark-like teeth which are fiiled with over 80 different bacteria.

Saliva owned by komodo is also considered as poisonous liquid which may bring such death to the prey. A komodo will not let its prey die at the same time and on the same place. It will wait for couple of days until the prey die and finally eat the carrion.

Normally a komodo eats once a month so it can survive by eating 12 times in a year. To make its belly full, adult komodo like hunting big preys, such as deer, wild pigs, water buffalos and even horses.