How to tell a bird is a Crow or a Raven

It is normal if we find difficulties to tell if a bird is a Crow or a Raven because both common large birds mostly look alike.

Their colors are similar: black from beak to legs.

Both black birds show aggressive and boisterous behavior when they feel threatened.

It is not surprising if they drive off a hawk or an owl.

Both creatures are playful, intelligent and good at solving puzzle. 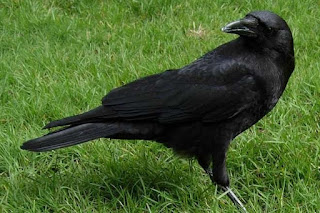 In the animal world, both Crow and Raven share treasure stashing along with great attraction to shiny objects like bits of broken jewelry and tinfoil.

They have preferences in food include everything from road kill to insects, fruits and berries, birds, snakes as well a small amphibians.

For the cast iron stomachs those birds are well known.

Crow and Raven are among those that like to play games and use tools.

It is frequently to happen that they try to steal stones or sticks from one another.

A fish crow likes to fly high carrying a shellfish and drop it on the rocks below it to break its shell.

Another similarity from both birds are that they have similar nesting season or period, that is from March to June.

Similar kinds of materials are used to nest such as sticks and twigs.