Inland Taipan – the Most Venomous Snake

Among high dispute about the most venomous snake, there is one thing that many people seem to agree on.

Inland Taipan (Oxyuranus microlepidotus) snake of Australia is largely accepted as the most venomous snake according to any criteria including the LD50 test.

This snake has the most toxic venom of all snakes in animal world as its amount of venom generated at a given bite is high too.

However, Inland Taipan or fiece snake is not considered the deadliest or the most dangerous one.

This snake is not aggressive towards humans so they are considered as the shy ones. 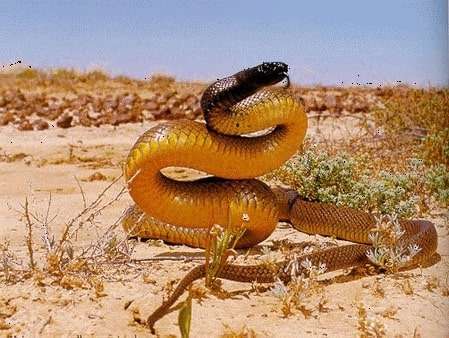 In addition, they don’t seem to show up in highly populated area.

This is proven by a fact that in Australia there are only 2-3 snakebite deaths every year while in the world every year over 40,000 people die from venomous snakebite.

Inland Taipan clearly does not cause many deaths of the people caused by snakebite.

Still the Inland Taipan has potential to kill people so that we should aware of it.

However, potentiality and reality is quite different.

In other word we can say that the Inland Taipan is highly venomous but it is not the deadliest one in the world.